It was an enormous pleasure to see one of our long-standing volunteers being recognised for her amazing efforts supporting  the League and other local organisations. Vice President, Lynne Hookings, was admitted as an Honorary Freeman of the Borough of Torbay 'in recognition and appreciation of her contribution to the tourism industry in Torbay and her unceasing voluntary work for the NHS and Torbay Hospital League of Friends'. She received her award from the Chairman of Torbay Council, Councillor Ray Hill, at a special ceremony. Well done Lynne! 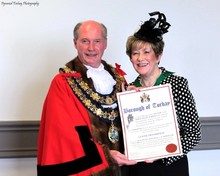