We've raise £1.6m! Torbay Hospital League of Friends is celebrating the successful achievement of their second biggest fundraising campaign since their foundation in 1954.  The ambitious ‘This is Critical’ campaign to raise £1.6million for the Hospital’s new Critical Care Unit (CCU) has reached its target in less than two years of fast and furious fundraising.

Recently appointed Chairman of the League, Peter Welch said : “It’s a tremendous milestone in the League’s history. I thought that the target of raising £1.6m was not only very ambitious, but also would be extremely difficult to achieve in the short time we had but I am pleased to say that I was proved wrong and we have reached the target earlier than originally planned. This is a tremendous achievement and could not have been done without the enormous help from all of the League’s volunteers, together with very generous support from the population of Torbay and South Devon.”

A key step in reaching the target was a fantastic contribution of £300,000 from the Paignton Hospital League of Friends, recognising that the new CCU will benefit patients from across the wider South Devon NHS area and showing the commitment and enthusiasm of the incredible network of Hospital Leagues.

The exciting £15m CCU will deliver a brand new, state-of-the-art critical care unit (CCU) with dedicated facilities for relatives. This major investment project will see a 14-bed CCU that will have all the latest technology and equipment required to provide a modern, patient focused environment. The project also includes a warm and inviting new main entrance with a café, a shop and additional public amenities.

Mairead McAlinden, Chief Executive of Torbay and South Devon NHS Foundation Trust, said that the new CCU: “… has only been made possible by the hard work and support of our League of Friends and the very generous donations from local people and businesses who support Torbay Hospital in so many ways.

“I want to thank the League and the many other people who have made this possible. Our League members are our partners in care, and their contribution – all done as volunteers – adds real value to the care we provide. Every patient we treat in Torbay Hospital will have benefited in some way from their work; whether it is from new state-of-the-art equipment, comforts for patients or new artwork to improve the look and feel of a ward.”

The Torbay Hospital League of Friends celebrated its Diamond Anniversary in 2014 and the search was made for something  mark this major milestone.  League Vice President, Lynne Hookings explains: “We felt that to fully equip the new CCU unit would be a fitting legacy to mark our Diamond anniversary and so launched the new ‘This is Critical’ appeal at the Anniversary Ball”.

The hard work of fundraising started in January 2015, so the League has reached its ambitious target in just 20 months of fundraising.  How did they do it? Well here are just a few examples of the many, many events and donations that have helped the League to reach their amazing target:

The League’s CCU £1.6m campaign is second only to the £2.4million that they raised to buy the state-of-the-art Da Vinci robot for the new Horizon Training Centre in 2009. The CCU has been the focus of all of the League’s recent efforts but, over the years, many other donations, small and large, have been made. The League’s records note that £12 was donated in 1954, its founding year, for fruit bowls and a picture so it is clear that, over the decades, the significance of the donations has increased enormously:

{C}£770,000 donated in 2012 for the mobile breast screening unit that used by thousands of women every year; critical in the early detection of one of the country’s most prevalent cancers.

{C}2004 was another busy fundraising year with the major Heart Appeal and the purchase of a range of equipment altogether totaling £1,197,886

During its 62 year history, and including the ‘This is Critical’ appeal, the League has now raised an incredible £16,805,595.

The League aim to enhance what the Trust provides, by purchasing 'extras' to offer the most advanced methods of treatment, for benefit of local people and staff of the hospital. All of this helps the hospital to maintain the highest possible standards as they manage an annual 78,162 accident and emergency  attendances, 417,978 outpatient attendances, 35,284 emergency inpatients stays and the arrival of 2,479 babies!*

The League’s work will of course continue as the local NHS grapples with increasing demand from a growing and aging population.  Lynne Hookings:  “We will barely have time to catch our breath as the next priorities have already emerged.  Working with the Trust’s Medical Director, we have already set our next target of raising £800k to fund more priority equipment purchases. But first we would like to invite everyone to join us in celebrating this achievement at our Celebration Ball on Friday 14th October.  It will be a celebration of course but it will also be our chance to set the ball rolling on fundraising for these exciting new projects, continuing our work as the Trust’s ‘partners in care’.  The hard work of this wonderful League goes on!”

Chairman Peter Welch, knows that the League’s volunteers are at the heart of this ongoing success: “Working with such dedicated volunteers has proved to be a very pleasant and enjoyable experience and I know that we will all continue in the future to help Torbay Hospital. In addition to raising much needed funds, the League helps in many other ways proving a valued service helping hospital visitors. We welcome anyone who wishes to join us to provide an even more valuable service in the future.”

To conclude, Peter Welch says: “This has been a tremendous effort by so many individuals, groups and organisations across the South Devon area and we are all humbled by this support. Thank you to one and all.”

Photo: The League’s hard-working Executive Committee decided to celebrate with a healthy version of champagne; a super-giant bottle full of … air! (picture from Paul Levie

The full list of projects donated to by the trust is available at:
http://www.thlof.co.uk/our-gifts 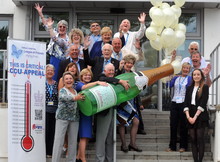