Ten  carers and office workers from Torquay-based Somerset Care joined together to raise money for Torbay League of Friends by doing a sponsored Olympic torch walk. The torch was hand crafted by one off the staff. The walk started at the comnpany’s  office on Teignmouth Road and they completed the five mile trek at Appleby’s for  well deserved refreshments. The event was organised by Claire Davies and between them they raised £430. 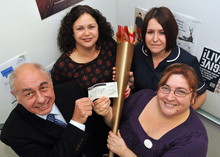